The Super Brownlee has arrived.

A few weeks of analysis, 3D scanning and countless hours spent in the Intel Lab produced the best of triathlete brothers Alistair and Jonny Brownlee.

Intel developed the Super Brownlee for a video game that allows the two to race against the hybrid version of themselves for unique training in the perfect setting - an Endless Pool®.

"The Super Brownlee combined the best of both of us," said Jonny. 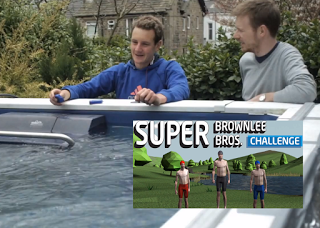 Olympic gold medalist Alistair Brownless (upper left) uses this Endless Pool for triathlon training and injury rehab. The Endless Pools Underwater Treadmill helped him rebound from an Achilles injury before his 2012 Olympic victory. The pool also figured in the development of a new Intel training game.

While Super Brownlee was ultimately unbeatable, the brothers put themselves to the test against the Endless Pool swim current to see how they measured up.

"We merged the worlds of sport and technology," said Alistair. "It's opened our horizons in terms of bringing technology into the training environment."

The tandem initially developed the game in the same backyard swimming pool that Alistair used to rehab from an Achilles injury and train in leading up to his Olympic Gold in the 2012 London Olympics. His Endless Pool came equipped with an aquatic treadmill, which allowed for the low-impact running he needed.

Jonny, despite a penalty, earned a Bronze medal in the event, and is the reigning Triathlon World Champion.

For the 'Super Brownlee Challenge,' the Intel team took the Brownlees to an indoor pool, showing the Endless Pool's versatility as a perfect training tool for the yard, the garage or the commercial facility.

Using a large video screen outside the pool to keep track of the race, Intel's team used an Ultrabook™ to run the game, as well as two additional Ultrabooks underwater paired with underwater speakers and lights.

"I'm looking forward to seeing where it goes," said Alistair.

The future of technology is promising for swim training, and the sport of triathlon can benefit greatly from the advances that Intel and Endless Pools provide.

Endless Pools, established in 1988, has served over 20,000 customers worldwide, and offers compact, customizable pools for indoor or outdoor use. With a series of six innovative products, from the Original Endless Pool to Exercise and Swim Spas, an Endless Pool can be tailored for rehab, competitive training, or family fun. Low-maintenance and environmentally friendly, Endless Pools has a product to meet virtually any need, from the novice swimmer to the Gold Medal triathlete.