The Independent: There's a Mad Fish at the bottom of the garden

Adrian Chiles writes in the Independent: Have you ever tried swimming butterfly? I can swim breast-stroke for several miles in open water and I can crawl reasonably well. As for butterfly, if I really concentrate I can just about manage one stroke before the lifeguards start shifting uneasily in their seats.

But the other day I heard tell of a woman who has managed not one length of butterfly, or even two, but the English Channel. This is an achievement which has even the most accomplished long-distance swimmers gasping in admiration. Take Mike Read, for example. In his 64 years he's swum the Channel no fewer than 33 times - that's more than any other man, so he is officially known in these circles as King of the Channel. But as he sits on his throne contemplating his 34th crossing ("I'd love to do it if someone would sponsor me. It costs two thousand pounds."), even he can't get his head round the enormity of butterflying your way across: "It's utterly staggering - there is no other word for it. When I was younger and swimming really hard I made myself do one hour of butterfly non-stop because I knew that if I could do that I could do anything. She is simply phenomenal." 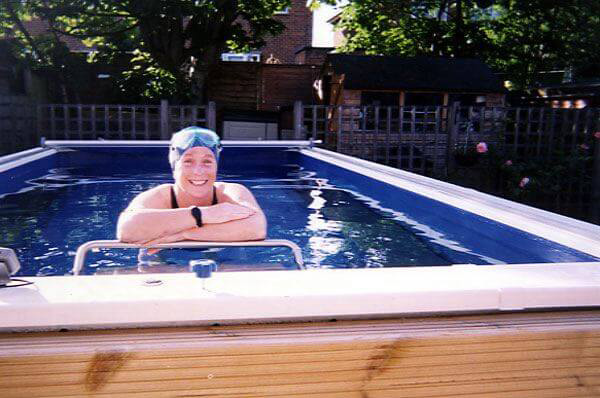 Julie Bradshaw in her Endless Pool

The King of the Channel is talking about Julie Bradshaw, a part-time lecturer at Loughborough University. Her nickname, for reasons that will already be abundantly clear, is Mad Fish. Mad Fish, 41 today, lives in a terraced house just off a main road into Loughborough. It's a small-ish house with a small-ish garden. But as I walk up the path the sound of splashing, groaning and cursing comes from out the back. Anyone walking past might speculate that some kind of specialist adult video production work is under way here, but I know better. To get her long hours of training in, Julie has had something called an Endless Pool installed. It's the swimming equivalent of a treadmill.

The splashing is Mad Fish butterflying; the groaning and cursing is the photographer trying to do the whole spectacle justice without drenching himself, or wrecking his camera.

Long-distance swimming first grabbed her when she was 13 on holiday in the Lake District: "I'd always been into swimming and I saw this sign advertising a race across Windermere and I just wanted to do it," she says matter-of-factly, as though nine out of 10 13-year-olds would have made exactly the same decision. By the time she was 14 she had set junior records for the 10-and-a-half miles of Lake Windermere and the 10 miles of Morecambe Bay. By 15 she'd swum the Channel, in 10 hours nine minutes, which remains the British Junior record.

From then on her teens seem to have been spent swimming incredibly long distances in very cold water all over the UK - Morecambe, Coniston, Ullswater, Loch Lomond. The cold's never bothered her. "You just get used to it," she shrugs. "Once when I was a kid the heating broke down at a pool in Blackpool. I was the only one in there. It just seems to suit me."

Is this any way for a young girl to spend her formative years? "I still went out a lot, and had a boyfriend and things," she says, "the only thing I missed out on was discos. My mum and dad said that if I wanted to swim the channel I couldn't go to discos."

Her parents were always supportive but even they thought the Mad Fish was losing the plot when she said she wanted to swim the Channel butterfly. "My Dad said, 'you're mad, you'll knacker your shoulders.' Up until now I'd been doing the crawl but even as a kid I was fascinated by the butterfly and when I heard that a Canadian woman called Vicki Keith had done it I knew I had to do it."

The butterfly is the hardest swimming stroke because your shoulders have to work so hard to get you up out of the water to breathe. So her already gruelling training schedule got much harder: "I just built it up until in the end I could spend all day in the pool, doing the 'fly, up and down, just building stamina." And back she went to the Lake District, butterflying her way across Windermere, Coniston and Ullswater.

In 2000 she was ready for the Channel but, after 10 hours, with France within her grasp - "I could have seen it if the fog wasn't so thick" - she aggravated an arm injury and had to stop: "It was a really good learning experience. A lot of people would say that if you don't succeed in something then that's failure but failure's too strong a word for me."

With a positive mental attitude like that a successful crossing was inevitable. It came in 2002 in a time of 14 hours and 18 minutes, more than nine hours faster than Vicki Keith, the only other person to make it. "It was fantastic. I can just remember touching the bottom. It was pitch dark, there was hardly anyone about. I just remember sitting on the beach, just sitting there. And then I got in the boat and came home."

The training was, and is, not so much gruelling as time-consuming. She swims more or less every day for up to an hour in her "treadmill" pool in the garden, then again in a normal pool at lunchtime. Once a week, she'll do a longer session. The morning after I met her she was in the pool at 7.30 in the morning and swam until 12.30. "You've just got to be focused and have a positive mental attitude. I never really get bored, I just think about things. I calculate how far I've gone and how fast I'm going - just little things to keep my mind occupied. I'll swim for an hour and it'll feel like five minutes."

This is sporting endeavour at its purest. There's no money in it, no fame or glory beyond a small band of enthusiasts. "It's just a challenge for me. Doing that swim in Windermere when I was 13 changed my whole life and I've never regretted anything."

Her next challenge is in July, butterflying the 28 miles around Manhattan Island. And after that? "Oh there'll be something, I'm sure."