Late afternoon in Polop de la Marina, a small Valencian village, and Rhys Davey works while his friends are off cycling. Davey – along with Alistair and Jonny Brownlee, the sibling triathletes and Olympic medalists, and the Slovak triathlete Richard Varga – is spending a few weeks here to escape the English winter and train under the Mediterranean sun.

But his work these days also includes serving as Head Coach and Manager of Aquatread, a recently founded training facility in Leeds that features the Brownlees' Elite Endless Pool®. Davey busily plans the upcoming Aquatread Grand Opening. The evening will include demonstration swims and runs in the Endless Pool, as well as a Q&A with the Brownlees. So while the others cycle, the 23-year-old triathlete sits in a bistro with his tablet. 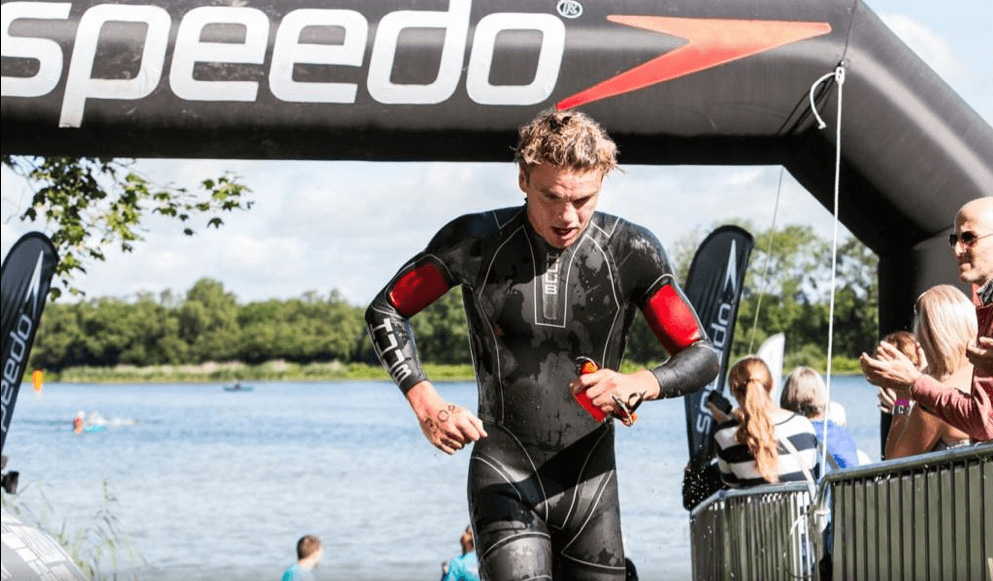 Rhys Davey, completing T1 of last summer's Castle Triathlon. In addition to competing, he's now coaching in the Elite Endless Pool at Aquatread, the Leeds training facility founded by Olympic medalists Alistair and Jonny Brownlee. Davey trains in the Elite himself as he prepares to take on more IRONMAN 70.3 tris in the upcoming seasons.

"It's our venture, something we're keen to do," he says of Aquatread, which offers training and coaching opportunities to their community. It's also available to local pros and amateurs in football ("the round version," he adds for us Yanks), rugby, and British Triathlon – "any sport where they feel hydrotherapy can be beneficial," which is pretty much any sport.

"With the addition of the Underwater Treadmill, we have a fantastic rehab facility." (And it was on the treadmill of Alistair Brownlee's first Endless Pool that he was able to train and rehab with a torn Achilles tendon in time to earn 2012 Olympic Gold!).

Davey praises the Endless Pools swim current for being "so good and so fast." The Elite model's adjustable current maxes out at a 0:56/100-metres pace, but "it can accommodate any type of swimmer. You can put cameras pretty much anywhere" for video stroke analysis. Davey calls it "the best of both worlds": "You have the ability to do absolutely everything" for top-tier swimmers, and yet it also works for beginners.

On the novice end, Davey helped a woman in her early 40s to tackle her lifelong fear of water. "She saw a real opportunity to overcome some of those fears" as the Endless Pool is shallow enough to stand in and offers the security of nearby benches and walls. "That worked fantastically" for her, he enthuses. "It's been great seeing her develop" to the point that she can now swim in a traditional pool (with a deep end!). This September, she plans to compete in the third-annual Brownlee Triathlon.

On the more seasoned end is Varga, the three-time ITU Aquathon World Champion, who's taken up residence a mere 400 metres from Aquatread. With his track record for consistently being first out of the water, swimming is a "huge strength" for Varga, and as Davey puts it, "you don't want to neglect that."

This Elite Endless Pool was the site of demonstration swims and treadmill runs at the Grand Opening of Aquatread, a new UK training studio. The guest list included dozens of athletes, physiotherapists, sports doctors, and local luminaries. Professional triathlete Rhys Davey manages and coaches at the facility, located on a Leeds cricket ground.

A decorated triathlete himself, Davey runs in the Endless Pool weekly. "It allows me to get extra mileage in without the impact of the roads outside." His regular swims offer additional endurance training.

Endurance has been more on his mind since he's begun to compete in IRONMAN 70.3 events. In 2013, he completed his first, finishing 5th, and has others in consideration for the upcoming season. He's aware that the sport is dominated by athletes roughly 10 years his senior.

"I've been fortunate enough to get a really good base," he says, referring to his six years of steady training alongside the Brownlees. If he lacks the "physical maturity" to consistently achieve "long-distance results," he's still optimistic that he can have "the odd one-off result, if you're clever with it."

And that approach aptly sums up the Aquatread team: young, ambitious, and bolstered by an unfailing work ethic … with no shortage of cleverness.