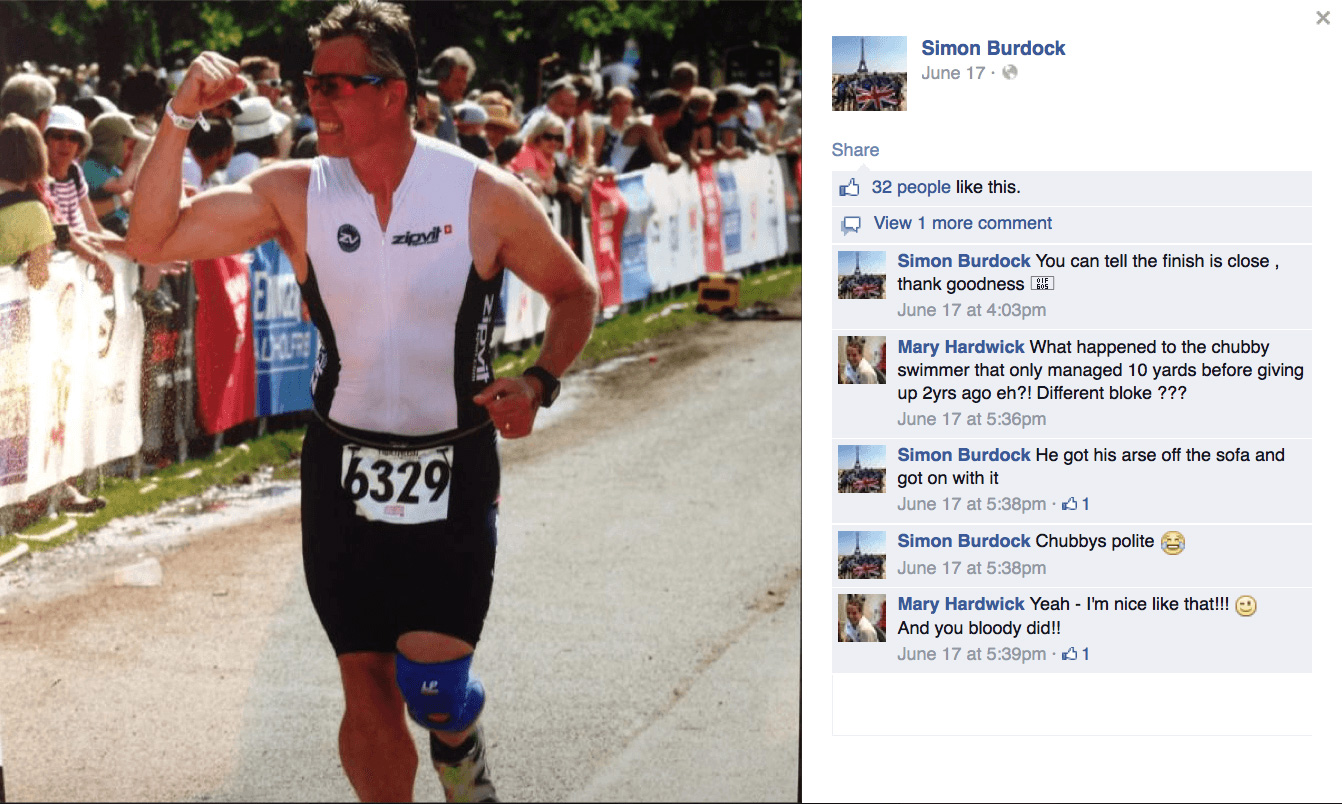 "What happened to the chubby swimmer that only managed 10 yards before giving up 2yrs ago eh?!" That pointed question, posted as a Facebook comment, comes from Dr. Mary Hardwick. For two years now, she's been using the Endless Pool® at her Inspire2tri studio to coach Simon Burdock, the man you see here, finishing this summer's Blenheim Palace Triathlon in the top third.

So what exactly did happen to Simon Burdock, besides simply getting "his arse off the sofa" as he commented in reply?

Then, as now, he was a family man running his own construction company. But then, he recalls, "I was overweight. I'd never done any sport. My knees aren't particularly good." One day, his proverbial arse was quite literally on his sofa as he watched the Great North Swim on television. A competitor with a similarly large build told the TV presenter why she was swimming Lake Windermere: "Me and four friends decided to do this. Then my friends bailed," he recalls her saying. Impressed at what she achieved on her own, he thought to himself, "If she can do that, there's no reason I can't get off my backside and give it a go."

He went to a nearby lake … and briefly reconsidered: "There's no way I can swim around that." That's when a chance encounter with another swimmer led him to Mary. "She's got this fantastic pool," he recalls being told.

"Pretty dreadful, really," is Simon Burdock's assessment of his first swim lesson, recorded here for posterity, in Coach Mary Hardwick's Endless Pool. As you can see in this time-lapse video, over 17 months, his stroke sharpened, with more catch; his body leveled out; and he graduated from a wetsuit to jammers. "The pool has been brilliant; I can see what's wrong and what's right." Of his progress, Simon notes, "Each time I went, I concentrated on just one thing. I'd get that right and then focus on the next thing."

Simon got his first swim lesson in Mary's Endless Pool in August of 2012. Mary documented that swim on video (above, edited with subsequent swims). "The first session, my legs were hanging down really low," he recounts. "There was no catch with the arms. It's really kind of silly when you look back at it."

After that one session, he attempted his first open water swim. "I was really big and looking pretty uncomfortable in a wetsuit, to be honest. I managed to swim about 50 metres, and that was it. It was a good incentive to get cracking." That meant two or three swim training sessions a week. "The more I trained, the more I wanted to train. Each time I went, I concentrated on just one thing. I'd get that right and then focus on the next thing."

"Mary is a fantastic coach," he enthuses. He also credits the Endless Pool and its video feedback system. "The brilliant thing is that she has cameras and would stop you every 30 seconds to show you what's right and wrong."

Several months later, he felt ready to take on Lake Windermere as part of the Great Swim series, the same event that first inspired him on television. He found the expanse of water "still pretty daunting," but "I actually managed to achieve it!" After that, he completed Great Swims in Manchester's Mariners Canal (which he'll repeat in 2015) and London's Millwall Dock as well as Inspire2tri's Rutland Water charity swim.

"I thought my knees weren't strong enough; that's why I started to bike – to build my leg muscles." That led to triathlon and, as cycling was "becoming bigger and bigger" for him, to the London to Paris Bike Ride. Completed this month with five friends, their ride raised approximately £6,000 for the Linc and Notts Air Ambulance, Sue Ryder hospice care, and the Heltwate School.

Between the swims, bikes, and runs, he's lost "about two stones". "My whole body shape has just completely changed." He noticed other changes too. "I could walk up the stairs" more easily. "Overall, I feel much healthier," including less back and leg pain. With two young children to keep up with, his improved fitness level has certainly led to an overall improved quality of life! 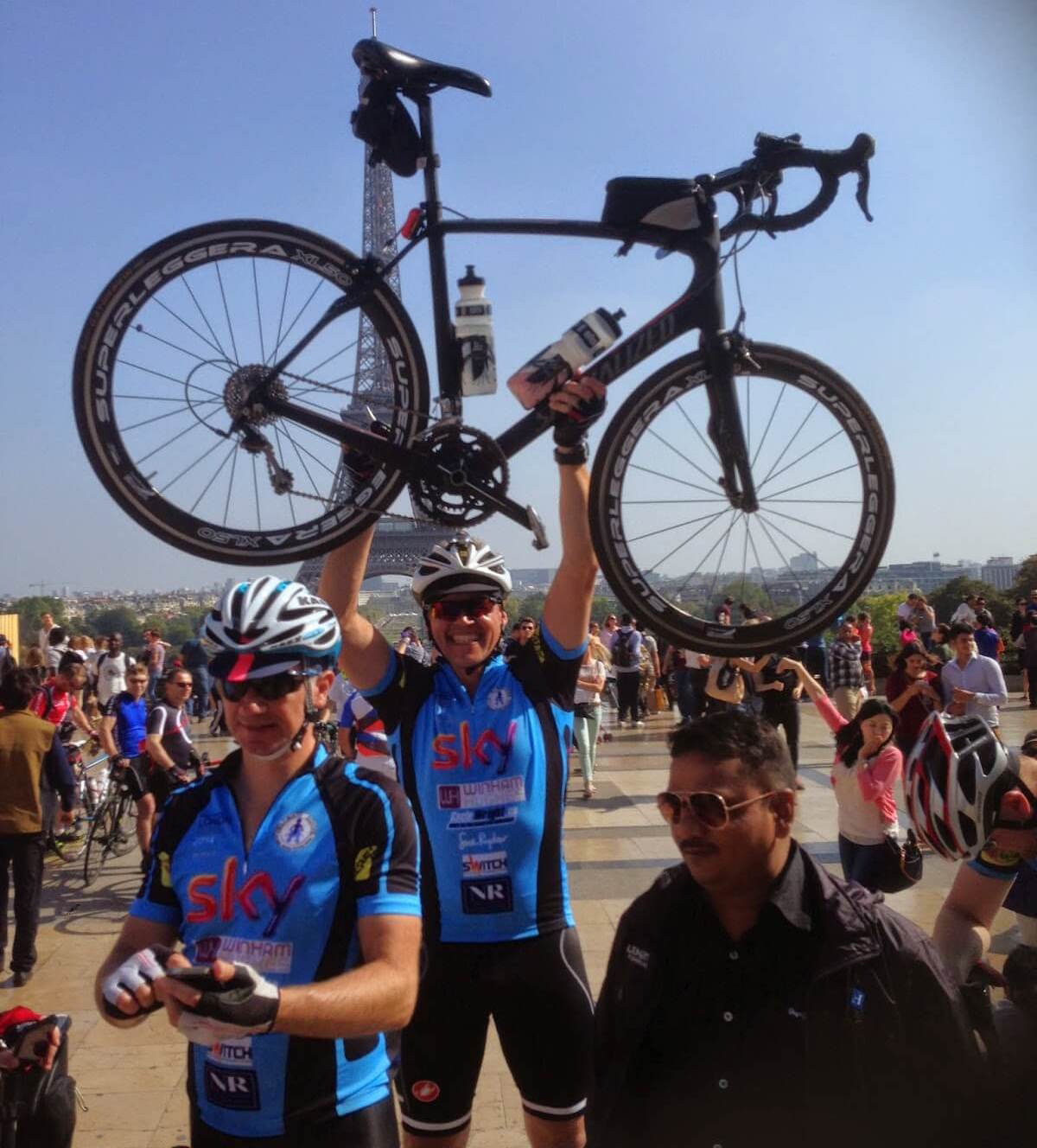 After making significant swim progress in the Endless Pool, Simon turned to cycling to strengthen his legs. Since then, he’s completed a triathlon and, pictured here, the London to Paris Bike Ride (note the Eiffel Tower behind his bicycle). His team raised some £6,000 for three worthy charities. Along with losing about 2 stones, increasing his energy, and bonding with his kids and his friends, it’s been a fruitful journey … one that began with a single swim stroke!

At the Lake Windermere swim, Simon recognized the woman he saw on television the previous year. "I had a chat with her and explained, 'You inspired me to get off my backside and be here!'"

In turn, he's inspired others. "The nice thing is, friends have watched what I've been doing and have said, 'I can have a go at that too.'" Also this year, his oldest daughter joined him for her first open water swim. And that, he says brightly, "is fantastic!"